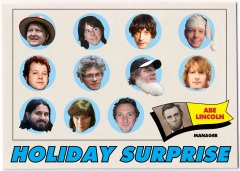 Holiday Surprise is here to spread their cheer wherever they can. This time around, the ATP festival is where the players will bring the fun. More than a dozen musicians will share the stage – whether all at once, one a time, or any number in between; seldom playing more than a couple songs in a row in the same configuration. They’ll swap instruments, play each others songs and maybe even treat audiences to one of Julian Koster’s famous games. The people in the crowd will have as much fun as the people on the stage – and that’s saying something.

While the Elephant 6 Collective Orchestra has existed in many sizes and shapes over the years, this most recent incarnation known as Holiday Surprise first came together in 2008. This weekend’s iteration of the Orchestra features players Will Cullen Hart, Pete Erchick, John Fernandes, Julian Koster, Scott Spillane, Andrew Rieger, Laura Carter, Bill Doss, Derek Almstead, Heather McIntosh and Robbie Cucchiaro – plus some special guests & friends – playing the songs of Elf Power, Circulatory System, The Gerbils, Scott E. Spillane EXP, Major Organ and the Adding Machine, Pipes You See, Pipes You Don’t, The Instruments and more.

Be sure to catch their set! No two shows are ever the same!